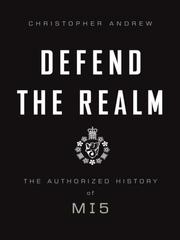 Defend the Realm: The Authorized History of MI5 by Christopher Andrew is a monster of a book, clocking in at almost pages in small type. I don't even want to consider how many words this book is. That being said, the book is very straightforward as a chronological history of /5. This review was originally posted on I wasnt sure what to expect from Defender Of The Realm, but as soon as it came through the post I skim read the first few pages fully intrigued and I was immediately drawn into a world that mixed the real world and fantasy world flawlessly and all with some historical facts, humour and well known United Kingdom landmarks too!/5. About Defend the Realm. For over years, the agents of MI5 have defended Britain against enemy subversion. Their work has remained shrouded in secrecy—until now. This first-ever authorized account reveals the British Security Service as never before: its inner workings, its clandestine operations, its failures and its triumphs.   Defend the Realm is not a flawless book. In any security service, it is difficult—perhaps impossible—to separate fact from fiction. With its eccentric mix of professional soldiers, amateur spies, and false identities, it is to Mr. Andrew’s credit that he has achieved so s:

Christopher Andrew talked about his book Defend the Realm: The Authorized History of MI5 (Knopf; November 3, ). Mr. Andrew was the first independent historian allowed access to the archives of.   Defence of the Realm by Christopher Andrew From Blackadder to Burgess and Maclean, this history of MI5 is a scholarly and hugely entertaining account, says Robert McCrum Robert McCrum. Defend the realm is an unique kind of book. It is a very informative, to the point of being a bit droll at times, but at the same time, it manages to capture the feeling of camraderie and adventure that it describes being present in Mi5. When I finished the book, I felt like I had just finished a career at Mi5 (and not just because of the book.   The officer, on that fateful occasion, was unable to fulfil MI5's motto: "To Defend the Realm". Nigel West is the author of 'TRIPLEX: Secrets from .